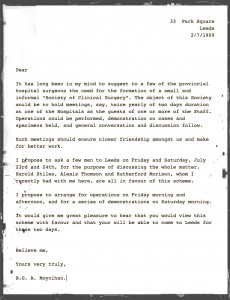 The Formation of the Moynihan Chirurgical Club

This letter led to the first meeting of the Moynihan Club which was held in July 1909. It included an informal discussion about “the need for a Society of Clinical Surgery and the methods of forming it”.

It was the first Club of its kind in the British Isles. In Manchester in 1911, it was decided that it would initially be known as “The Chirurgical Club”. In 1929, in recognition to Lord Moynihan who had recently been honoured by the King by being raised to the peerage, the Club changed its name to “The Moynihan Chirurgical Club”.

In October 1932, the Club agreed to the suggestion of Professor Grey Turner to adopt as its motto: “Without Frontiers”.

The original minutes and records of the Club were destroyed by enemy action in the “Blitz” on Sheffield at the house of Professor Ernest Finch, the Honorary Secretary, on December 12th and 13th 1940. Full reports do exist of many of the past meetings.

The original membership of the Moynihan Chirurgical Club:

Want to join the discussion?
Feel free to contribute!