You are here: Home1 / Lord Moynihan – A History 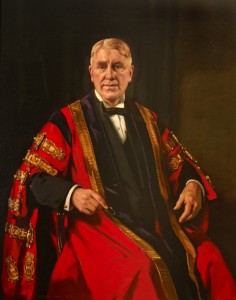 Berkeley George Andrew Moynihan was born in Malta in 1865 and died in 1936. He trained at the Royal Naval College. He had originally intended to follow his father into the army but decided that the Moynihans “had done enough killing. It’s time they mended their ways” (1). He continued his medical training in Leeds Medical School and the University of London achieving his M.B., M.S., in 1887 and subsequently his FRCS in 1890 and Master of Surgery in 1893 where he was awarded the gold medal (2). He never failed an exam and he won every prize available to him.

During his medical career, he strove to drive out quackeries and worked hard to encourage surgeons to work together and share knowledge. Until this time, there had been a culture of rivalry amongst surgeons.

Lord Moynihan was renowned for his limitless energy in every aspect of life. He was once asked by a junior colleague if he ever became very tired. His response was, “I have never been tired in my life”. He had a combination of mental and physical toughness with an iron will to drive to the limits of ordinary human endurance, or beyond it. (1)  As a junior doctor, he worked for McGill as surgeon’s dresser and then for Mayo-Robson as house surgeon. Moynihan assisted McGill at the first operation performed for prostatectomy. McGill had removed a “tumour” at the base of the bladder and Moynihan examined it under a microscope to find that it was prostatic tissue. He pointed out the mistake to his superior who announced: “then why don’t we always take the prostate out when it projects into the bladder?” This marked the first prostatectomy operation.

He was a general surgeon with a wide set of interests but his greatest pride lay in what he had done for the elucidation of the duodenal ulcer (1). He made 134 contributions to surgical literature, culminating in his first book: Abdominal Operations (1905). This was based on 10 years of notes and was re-published four times by 1926 and had an immense impact on the development of abdominal surgical standards in the United States and Britain. He later wrote: Duodenal Ulcer, Gall Stones , Retroperitoneal Hernia and The Spleen, and many other books of collected essays.

Lord Moynihan was “not handicapped by possessing any trace of modesty” (1) and he had disproved the popular idea that the best surgery was to be had in London. He regarded science as an “exact observation, inductive reasoning, of pursuit and discovery of broad truths” (1). He performed other “firsts’ in surgery, not always welcomed by his peers but that changed surgery forever:

His aim of starting the Chirurgical Club, as it was first known, was so that  “provincial” surgery could be seen to transcend anything to be seen in London and to give impetus to the advance of surgery in all parts of the United Kingdom. As Lord Moynihan said “I look back upon the formation of the Club as one of the happiest inspirations of my life. It seems to me that my ideal has been completely realised and that through the work of the Club, not only has the cause of surgery been advanced, but many warm friendships among surgeons have been created”.

After the creation of the Moynihan Chirurgical Club, he went onto create the Association of Surgeons, and The British Journal of Surgery.

Want to join the discussion?
Feel free to contribute!